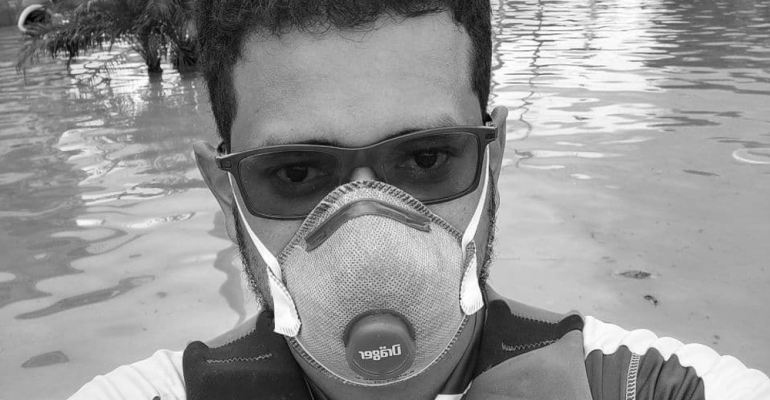 ADH’s members, like most of our compatriots, have been affected by the passage of Hurricane Eta in Honduras. On Thursday, November the 5th, we woke up with the terrifying news that one of our colleagues, Nadia Seren, had seen the water, coming from the Chamelecón River, rise in a matter of minutes in her home of La Lima, Cortés. She did not have time to escape and had been sheltering since midnight on the second floor of her home, along with her sisters and parents. Her neighbors who did not have a second floor were in even more precarious situations, waiting for help from the roofs of their houses. They were far from imagining that the long-awaited rescue would not come from the competent authorities, but from the kind-hearted Hondurans who rushed into the flooded areas without much thought to help their neighbor.

Jeffrey Suazo, one of the founding members of ADH, was one of those heroes. He decided to organize a rescue operation with the help of his wife Dulce Rivera, buying a second-hand boat in Omoa. From San Pedro Sula, he drove in the persistent rain to the north coast to pick it up. There, he met Elder, a generous fisherman of the area who offered to lend him his motor for the boat. Elder ended up accompanying Jeffrey and Dulce to La Lima to help maneuver the boat. When they finally reached the water on the highway between San Pedro Sula and Progreso, it was already very dark and there was not much to be seen. The current felt very strong and dangerous so they decided to wait until morning to venture into the water. After a few hours of sleep and despite being tired, Jeffrey and Elder continued with the same motivation, focused on a single goal: reaching Nadia’s house located near the Ramón Villeda Morales International Airport, also seriously affected by the floods. On the way, they met several people and pets who needed help and put them on the boat because they were clear that they could not leave anyone behind. Finally, after several hours of tireless work, they caught up with Nadia and her family on Friday afternoon, November the 6th. One by one, they were taken to the mainland where the fear of running out of clean water and food turned into a distant nightmare.

In times as difficult as the ones that Honduras had to experience in recent weeks, it is always encouraging to remember that friendship and love for your neighbor can overcome anything. Many thanks to Jeffrey and Dulce for reminding us of these principles. It is with great pride that we call them brothers!